After the second world war, there were large-scale building schemes to provide housing for the many people who lost their homes due to bombing and for new arrivals coming to Britain to help re-build it, as the war had taken its toll. During the 1950s and 1960s, there was a trend to use metal frames rather than wood. Windows were single-glazed with standard glass panes. 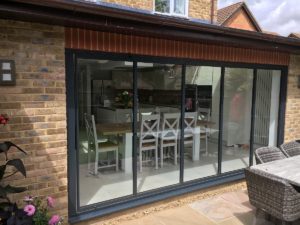 At the time in the UK, the '60s felt like the doorway between a staid old past and a bright promising future. Not just fashion and pop music, but architecture too. Even at the lower end of the scale, houses were being constructed with picture windows and sliding patio doors to the garden.

Towards the 1970s, double glazing was introduced. Windows and patio door frames were available in plastic and timber. Even so, sliding them across was still a chore. Companies continued to improve their products and PVC became a popular choice.

Skipping forward to the turn of the century, doors and windows are available in timber, pvc, composite and coated aluminium. Aluminium frames should be 'thermally broken' to comply with British Standards, which means that the cold air on the outside frame does not reach the inside of the frame. All glass units in the home should also be double glazed for the same reason.

Door styles have evolved, too.

Contact us for your made-to-measure slide-and-pivot stacking patio doors.